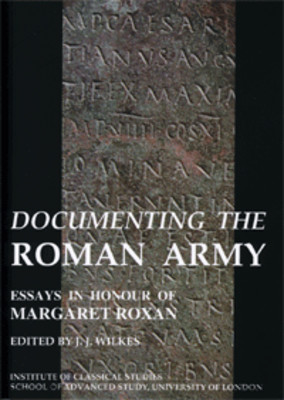 This volume places on record the proceedings of the colloquium held in honour of Dr. Margaret Roxan at the Institute of Classical Studies in May 2002. The theme of the colloquium was the written record of the Roman army, though the scope of the contributions embraced both historical and archaeological topics. Central to the discussions were the military diplomas recording grants of citizenship and other privileges to various categories of military personnel. The study and publication of these important records, of which several hundred are known, was Margaret Roxan’s life work. Over thirty years she worked as a dedicated scholar with minimal help from a few institutions. Her three edited collections of newly-found diplomas have acquired a scholarly authority that places her in a direct succession to Theodor Mommsen and Herbert Nesselhauf.

A. R. Birley The commissioning of equestrian officers.

D. B. Saddington An Augustan Officer on the Roman Army: Militaria in Velleius Paterculus and some Inscriptions.

Lawrence Keppie ‘Having been a soldier.’

Paul Holder Auxiliary deployment in the reign of Hadrian.

Valerie A. Maxfield Ostraca and the Roman army in the Eastern desert.