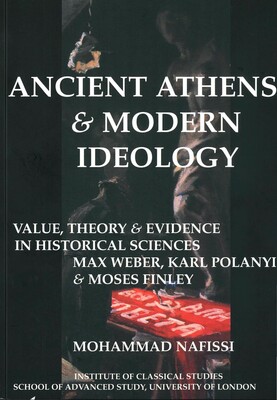 For over a century the foundations of Athenian political economy have been debated by scholarly camps broadly described as primitivist/substantivist, modernist and Marxist and involving political economists, sociologists and anthropologists as well as historians and classicists.

Ancient Athens and modern ideology demonstrates the dialectic of intellectual and substantive history and offers a consensual resolution to the debate by examining the interplay of values, theories and evidence in the contributions of Max Weber (1864-1920), Karl Polanyi (1886-1964) and Moses Finley (1912-86), widely recognised as successive champions of the primitivist cause. Pursuing Finley’s own ‘official’ account of his intellectual roots and hegemonic perspective, the book starts with Weber and Polanyi and ends by finding the actual views of all three far more complex than generally assumed by their followers and critics.

Through systematic scrutiny and contextualisation of tensions in their work arising from the resistance of facts ancient and modern to theories and the varied dissonance of both with ideological priorities the case for a radical reconsideration of the debate and its protagonists is argued.

The book concludes with an account of Athenian developments and institutions which draws on recent scholarship associated with modernism and Marxism as well as primitivism. The work’s interdisciplinary approach and multidisciplinary scope will be of major interest to all concerned with the historical sciences in the broad sense of the term.