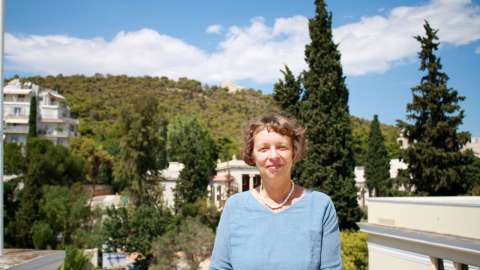 Marion Meyer studied Classical Archaeology, Ancient History and Ancient Greek in Bonn and Munich. She defended her Ph.D. thesis on Greek document reliefs in 1984 in Bonn and her habilitation thesis on the function and meaning of figures with mural crowns in Hellenistic times (the so-called city tychai) in 1997 in Hamburg. After having taught in Munich, Hamburg and Gainesville/Florida she was Professor of Classical Archaeology at the universities of Bonn (1997-2003) and Vienna (2003-2020).

Her main research interests are ancient Greek culture, ancient Athens, visual communication; the creation, tradition, use, function and significance of images; phenomena of acculturation in the Eastern Mediterranean. Her recent publications on these subjects include Athena, Goddess of Athens. Cult and Myth on the Acropolis until Classical times (2017, in German). Currently she works on two projects: an analysis of the visual representation of the Royal couple Arsinoe II and Ptolemy II in Early Hellenistic Egypt and a study on commemoration of the dead in Classical Athens. During her stay at the ICS she will pursue this latter project and concentrate on the material evidence for public and private commemoration from ca. 500 to ca. 400 BCE.