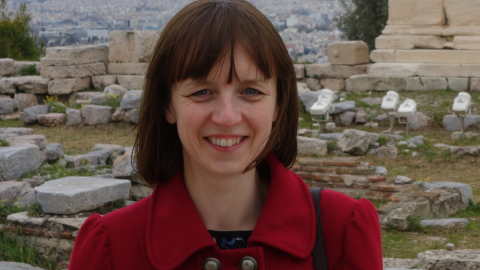 Emma Bridges joined the ICS as Public Engagement Fellow in September 2017. After an undergraduate degree in Classics at Oxford, she completed her PhD at the University of Durham. Prior to moving to the ICS Emma was a Lecturer in Classical Studies at the Open University, where she worked to make classical subjects available to those with a diverse range of backgrounds and experiences. She brings to the ICS her experience in making academic research accessible to audiences beyond academia, and to those for whom Classics has not traditionally been available as a course of study, as well as her commitment to fostering conversation and collaboration between academics and wider communities.

Emma’s published research focuses on the ancient and modern receptions of the Persian Wars; her first book, Imagining Xerxes: Ancient Perspectives on a Persian King, looks at ways in which Xerxes was reimagined in a variety of ancient literary and historical contexts. She is also responsible for conducting a series of interviews for the online open access journal Practitioners’ Voices in Classical Reception Studies, with a particular focus on contemporary reworkings of ancient myths. Her current research project brings together her interests in the depiction of armed conflict and the reception of ancient myth by exploring the ways in which the experiences of soldiers’ wives depicted in the Homeric poems and Athenian tragedy relate to those of modern-day ‘military wives’.